Skyhawks Sports (the umbrella organization including SuperTots Sports Academy) started as a regional soccer program focused in the Pacific Northwest. Founded in 1979 they were pioneers in the industry before franchising in 2012. The popularity of the camps grew as the years went by, and some amazing athletes and wonderful individuals emerged. These soccer-focused Skyhawks camps emphasized critical lessons in life, such as sportsmanship, teamwork, and winning and losing with grace. As the years passed, Skyhawks added more sports and more safe, fun, and skill-focused camps for sports like basketball, flag football, volleyball, golf, tennis, lacrosse and baseball while remaining true to its purpose and vision. Today, Skyhawks offers camps, classes, clinics and leagues in more than 25 US States and Internationally. It is a fast growing franchise opportunity for those seeking flexibility of their schedules and a business model with a very high rate of success – one of the highest in their space.  Meet Kim Wakefield – a single mom creating her own destiny in this innovative and rewarding business. 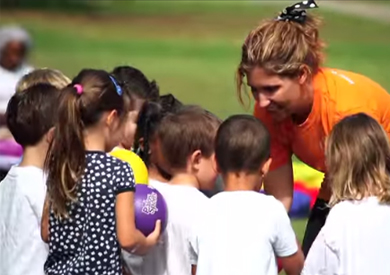 1.  What was happening in your life that caused you to want to own a business?

In 2008 when the economy crashed the entire financial industry (and the company I worked for) changed dramatically. The culture shifted, 20% of the 8,000+ employees were laid off (I was not one of them), and it just became a different place to work. I liked the people I worked with, but the decreasing autonomy really got to me. (I was pretty much stuck in the movie Office Space. I even had a red Swingline stapler.) I was in a rut – coming and going and doing the bare minimum which wasn’t like me at all, but I stuck with it because I was raised with the idea that success means getting a steady corporate job, working your way up the ladder, ensuring guaranteed financial stability and a nice retirement package, and taking little to no risk.

When my daughter was about 11 years old, she started having some health issues.  Eventually she was diagnosed with Celiac Disease. Removing gluten from her diet helped, but she was still having a lot of issues. Her immune system was too busy fighting itself to fight off anything external.  We finally found a doctor who thought outside the box and (after a lot of testing including multiple blood draws, two endoscopies, and a colonoscopy) discovered that she also has something called Mast Cell Activation Syndrome. Mast cells produce histamine, and hers crank it out like crazy. She has multiple food allergies, is on a cocktail of medications to stabilize it, and she still carries an epi-pen because she is at risk of anaphylaxis at any given time.  If having a child throws your life into perspective, having a child with health issues does so exponentially more – not to mention the multiple time-consuming doctors’ visits per month that wreak havoc on a traditional work schedule.

There was some overlap between the franchise starting and my quitting my corporate job. I found myself spending less and less time on my full-time job and more and more time wanting to work on this business.  The ramp up in my daughter’s health issues coincided with the decrease in my happiness at working 7am-7pm every day plus an hour commute each way. (11 miles. One hour to drive 11 miles.) I needed flexibility and autonomy. So, in 2012 I quit.

2.  Why franchising (did you consider a startup)?

Owning a franchise is like Entrepreneur Light. Starting a business is hard enough. Starting a business with zero support seemed like an impossible (and to be honest not very fun) task. There are so many great opportunities out there for you to still be your own boss and know that effort equals reward (which is something huge I felt that I wasn’t getting at my corporate job) but do it with the backing of a company that has a proven model of success and a great product.

3.  Why SuperTot Sports Academy – did you look at any other options?

Two reasons. 1.) The product was fantastic. The curriculum was hands down the best I’d seen and far superior to anything I’d had my daughter in when she was little. And 2.) There was a lot of freedom and flexibility to still run my own business. The franchise models I was familiar with before were the international giants where there is ostensibly almost no flexibility and everything is really already determined for you. “You MUST do this. You CAN’T do that.” Competitors to SuperTots that I looked at were similar. With SuperTots I can customize different aspects of the business to fit my market. It really is the best of both worlds. The increasing amount of support that my parent company has developed is amazing, but it’s just that – support, not dictation.

4. What was the biggest surprise (something you didn’t expect) when you opened your business?

Also, it’s expensive to start a business, and though I’m fortunate to have a fairly low-overhead business, it’s really easy for money to go out far faster than it comes in. And learning to manage that uneven cash flow takes a lot of work.

5. What would you have done differently now that you know what you know?

I would have allocated my time and effort differently, and I would have thought more about the big picture. It is so easy to get caught up in minutiae and the day-to-day aspects of running a business, and to be honest that is something I still struggle with. I would have set up my infrastructure to be more reliant on my employees instead of me feeling like I needed to do everything myself because no one will do it as well as I will. One thing I took from my IT days is that having a single point of failure is a bad idea. This is a transition I’m still going through and it’s rough. People are resistant to change.

6. What’s the best thing about owning your own business?

Effort equals reward. I know that the work I put in will directly correlate to the amount of success I have. Seeing families incredibly satisfied with the programs we offer is a feeling like no other. The other day a mom came up to me and said, “We’ve tried a lot of different programs, and I have never seen my daughter have as much fun as she does in your class.”  Things like that, along with seeing the look on a kid’s face when they do something that they never thought they would be able to do, is why I do what I do. I know that those are things that I could encounter in other similar professions, but it’s a completely different feeling of accomplishment when it’s your own business.

Also, being able to work my schedule around my daughter’s is a huge plus. My mom said the other day that I have the perfect job for someone with a sick kid. And as much as my daughter doesn’t like to think of herself as a “sick kid” it’s still a true statement.

Growth! I am working hard to offer our programs to more schools, cities, and organizations. I know we’re the best at what we do which is a huge confidence booster when talking about what we can offer. I am also looking forward to adding the Skyhawks side of our business (6-12-year-olds) to our programming. I love coaching classes, but I am trying to step back from doing as much coaching as I currently am so that I can focus on business development. It’s hard to relinquish control.

To learn more about the Skyhawks or SuperTots Sports Academies click here.